Ievaz Moderator
May 2021 edited May 2021 in Server management

It is essential to check RAM usage for a few reasons. First of all, it can provide information on whether it’s necessary to upgrade your VPS plan to a bigger plan that RAM usage limit would increase. If you notice that more utilization regularly nearing full capacity, it might say that your system needs an upgrade.

Also, it can help you track down issues that might be related to RAM usage. For example, high RAM usage or a spike in memory usage can indicate the issue with processes running on the server.

Thus in this tutorial, I will explain how to check memory usage via SSH.

free -m command displays the current memory usage on your VPS and the output should look something like this:

So when you check RAM usage, you should pay attention to 'buff/cache' column. Linux OS uses unused memory for disk caching. This is a normal process because that's how Linux works. It often seems that the server is using all the RAM, but it's not true, so the real used RAM is displayed in 'used' column.

More information about this process can be found here.

Another useful tool is ps, which will show you all of your running processes with RAM usage as a percent of total RAM. Without any option and argument, the ps command shows only the process running under the logged in user account from the current terminal:

a:- This option prints the running processes from all users.

u:- This option shows user or owner column in the output.

x:- This option prints the processes those have not been executed from the terminal.

ps aux will provide all the running processes in the system regardless from where they have been executed.

So ps aux is useful if you only want to see a particular process(es). For example, if you want to see only running Apache processes, you should use this command:

For PHP processes, you can use this command

If your used memory usage reaches almost the limit, you should check which processes are using mostly RAM because it might lead to problems. For instance, if on your VPS is hosted a website, it might stop working due to memory saturation during peak hours. Later, it might start working normally once the traffic decreases to more manageable levels.
So it's important to configure VPS correctly and have enough resources to prevent such problems.

top command displays virtual memory usages by each process. It displays how much memory % a process is consuming separately for each running process. Also, top command provides a listing of the most CPU utilization tasks and also can sort the tasks by memory usage, CPU usage, and runtime.
You can use single top command to display memory usage only: 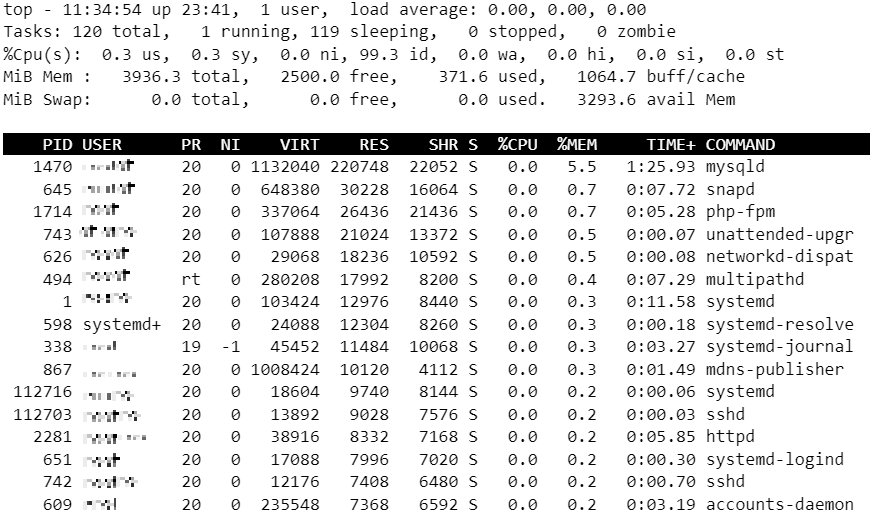 Command htop is very similar in functionality to the top command,. However, htop is a bit more graphical and shows information a little more friendlier than top.

Also, both of these commands have a real-time visualization.

More about these commands you can find here.

Using the various commands from this article, you will be able to review your server’s RAM usage because understanding memory usage is important for overall system-performance measurement.