Installing Ruby on Rails on Ubuntu

Giedrius Moderator
November 2017 edited November 2017 in Linux Applications
In this article we will provide basic steps on how to install Ruby on Rails onto Ubuntu based VPS. Ruby on Rails is one of the most popular programming languages nowadays based on GitHub.

Ruby is known among programmers for a terse, uncluttered syntax that doesn’t require a lot of extra punctuation. Compared to Java, Ruby is streamlined, with less code required to create basic structures such as data fields.

Rails is a framework for building websites. As such, Rails establishes conventions for easier collaboration and maintenance.

Before you start installing Ruby on Rails, prepare your server for it. Make sure your system is update:
Also, you will be required to install Curl at some point, why not at the beginning:
Installation

After that, you will need to install Ruby Version Manager (RVM), which will help to follow newest available Ruby version and install them quicker:
Before starting to use RVM, you need to execute one more command:
You can list all available Ruby versions:
You will be presented with a list of available versions, like example below: 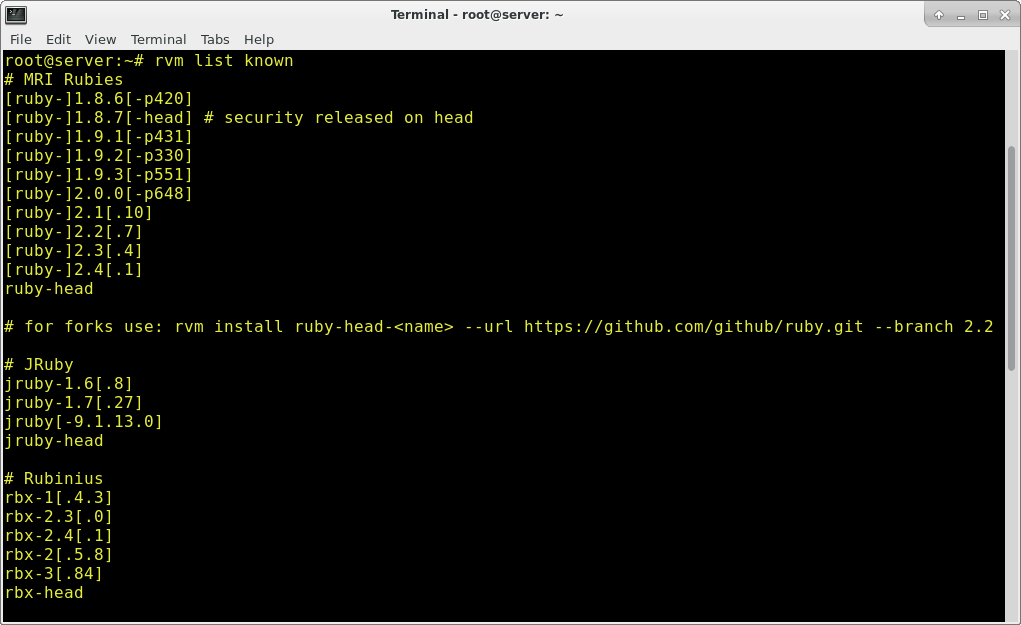 You can choose one and install as following:
Once you install Ruby, you can check the version with the following command:
You will see something like:

After Ruby is installed, you may as well proceed with Rails installation:
You can check Rails version at any time as well:
Results should be as following:

That is it. You have installed Ruby on Rails. Now you can start your new Rails application:

We will create a new project-specific gemset. When we create the gemset, it will be empty (though it inherits use of all the gems in the global gemset). However, we will be able to install a more specific version of Ruby if needed. As you may understand RVM allows you to use multiple Ruby version with every new project (gemset). We also install Raills as a framework for specific gemset.
Then we will set what version of Ruby will be used:
As well as installing Rails to this specific gemset for your specific application:
After that just start the new project:

That is it, your project (gemset) has been created.